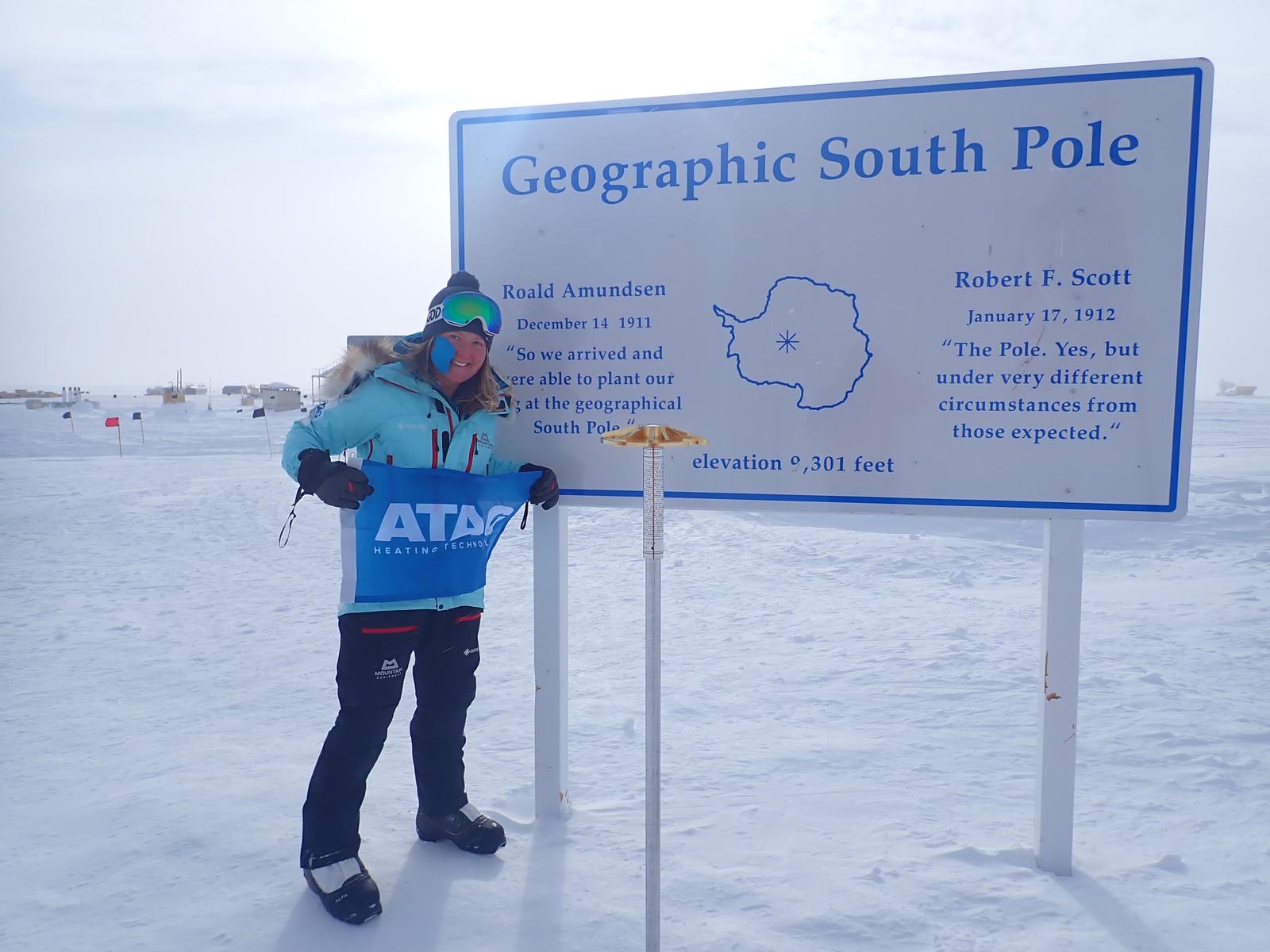 Mountaineer Mollie Hughes has hailed ATAG for helping her become the first woman to ski solo from the coast of Antarctica to the South Pole.

In a fascinating webinar held for ATAG staff and installers, the 29-year-old adventurer revealed how she battled temperatures as low as -45 degrees, a whiteout that lasted eight days, and told of her joy at finally reaching the South Pole.

But Mollie’s expedition was nearly over before it had even begun, as she struggled to raise the funds for the 2019 trip.

She explained: “To afford to go on these trips I need sponsorship from companies, and it’s the hardest thing in the world. For Antarctica I spent around 18 months just writing to different companies to try and get them on board. I had some good meetings and some bad meetings, and made a bit of progress, but I still had a massive chunk of money I needed to get.”

Luckily, in September 2019, just one month before her trip, ATAG was able to complete Mollie’s funding in order to send her to Antarctica.

She said: “Getting the call from ATAG was one of the best phone calls of my life. It’s an amazing feeling when someone hears your story and wants to get on board.

“I auctioned off my right bum cheek for tattoo space when I was 20 to fund my trip to Everest. In the end, my tattoo went for over £1,000 and I now have a tattoo of two kissing chickens.

“When I was raising money for Antarctica I decided to put the left bum cheek up for sale for tattoo space, which got picked up a lot by the press. I was in almost every newspaper and luckily ATAG picked up the story. I was a bit concerned that ATAG were going to put a tattoo of a boiler or something on my bum cheek but luckily they said “you don’t have to get another tattoo.”

During the webinar, Mollie also spoke of the challenges she was presented with during her world-record-breaking journey, including facing a complete whiteout that lasted for eight days.

She said: “For eight days of my trip I could only see for a metre in front of me. You couldn’t tell your left from your right and it just went on day after day after day. Most people who have been to the Antarctic speak of this happening for a few days, but never eight.”

But after over a week of limited visibility, the sun finally came out for Mollie. She added: “It was amazing. I woke up that morning on day nine and thought ‘here’s another day in hell’, but then I remember seeing this huge line in front of me. I looked to the right and saw these three black blobs. As the clouds cleared around me I realised they were mountains. It was really reassuring to realise I was in the right place. I cried so much when the sun finally came out.”

Mollie also told of the physical challenges she faced, including keeping up her strength for the 700 mile long journey.

She said: “The sled I was pulling behind me weighed around 105 kg, a crazy kind of weight. I was burning 5000 calories a day by pulling the sled, but I was only eating around 4000. I snacked on snickers bars, nuts, fruit and salami. My evenings were all about eating in the tent, melting ice and adding it into my food and eating as much as I could. I would add butter to my meals just for the calories.”

But it was the mental challenges she was presented with that were the most difficult. She described: “Physically, it's incredibly hard, but probably around 70-75 percent is mental strength. I was on my own the whole time, but this is why I wanted to go down there and test myself, to see if I could do this all by myself. But it was hard.”

When asked if she ever thought about giving up, Mollie said: “I don’t think so. Making every decision by yourself, you definitely feel that kind of pressure. But coming out of it, I feel so much more confident, so much stronger. I can achieve anything really.”

And after 58 days on the ice, Mollie finally reached the South Pole. She said: “As I skied in, you know I was expecting fireworks or at least somebody there clapping me in, but as I came into the camp there was no just no one there. I remember thinking “where on earth is everyone”. I went into a tent and there was a guy there cooking breakfast who told me everyone was still asleep. But then when I woke up and I got my first hugs in over two months it was amazing.”

Mollie also compared her extreme isolation in Antarctica to the current Covid-19 pandemic. She said: “I got back in January and had two months of freedom, and then at the end of March I was back into social isolation once more. I think there are tons of similarities between Antarctica and what we’re doing now, and I’ve drawn on that to help me get through the lockdown. But I am feeling a little bit claustrophobic. I’m ready to get back to the mountains.”

With two world-records under her belt, Mollie is now done with solo adventures, and plans to organise her own expedition and inspire a new generation of mountaineers. She said: “I want to run expeditions to the Himalayas for young people and just share some of these incredible places that I’ve been to. Probably no more solo expeditions. As glad as I am that I’ve done it, I love being around people, being around teams, and especially having the chance to lead teams and show them these incredible places. I think that’s probably what I’ll be doing next.”